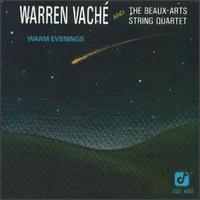 A program of music for string quartet plus rhythm section and Warren Vaché on cornet, interspersed with songs played by the jazz trio (rhythm section) alone.

The musicians on the original project were the members of the Beaux-Arts String Quartet:

Click here to listen to Jack Gale’s arrangements as they were played on the original recording by Warren Vaché and the Beaux-Arts Quartet.

(Original recording produced by Concord Records and available from Amazon or iTunes.)

Jack Gale attended Wichita University in Kansas as a theory and composition major.
After coming to New York in 1957, he played with several major bands including Buddy Morrow, Maynard Ferguson, and Woody Herman, as well as with the Kai Winding Septet.
Since 1961, Mr. Gale has been a member of the orchestras of more than forty Broadway shows; numerous movie soundtracks; countless record, jingle and television dates; and he has continued to work in the concert, jazz, and educational fields.
From 1965 through 1980, Mr. Gale was trombonist and musical director of the Manhattan Brass Quintet, for which he developed and arranged extensive music education programs.